Would you delete your original game because the clones and follow ups were more succesful?

The beginning:
In 2014 me and my buddy Sabba created a series of apps.
Three Points, Four Points up to Six Points.

Segmented coloured geometric shapes which you spin on tap to match the incoming coloured ball.

Three Points was featured by Apple for all of Europe as „best new game“ and after that week even slipped over to „What we play“. The game had 400’000 Installs, the game was free and only had an ad banner so we created minimal money but it was still a big success for us.

Can we have your idea?
A marketer contacted us quickly and wanted to buy the rights to make his own version of Four Points. For a minimal amount of money we gave him the rights as we didn’t make much out of our insane amount of downloads.

A week after that their version went live and was called „Impossible Rush“ but here comes the clue. They marketed it as the invention of the back then 14 year old Ben Pasternak.

Good Story right? So thought Forbes and plenty of other influencers. Also Apple Featured then app, this time „internationally“.

The guy is currently marketed as 16 year old App Millionaire as he also „invented“ Flogg.
Who knows..

Respect to those wo deserve it:
A dozen of cheap clones and templates flooded the App Store and internet, trying to imitated three points and specially impossible rush’s success story.

It took a while until some company really put it to the next level.

Color switch was here and still keeps its place in the top charts of the App Store by now.
It did what we missed to do, properly fleshing it out.

The conclusion?
Three Points is still up and running and has around 15000 active installs.
How ever I already removed the other shapes/games and also this one is not the best in monetisation and it could appear like a cheap clone of impossible rush or color switch.

The survivors of the darwinistic app portfolio management

Out of 40 apps these are the survivors, two of them have still chances to drop the rest is perfect fine and reflects my currently best work. 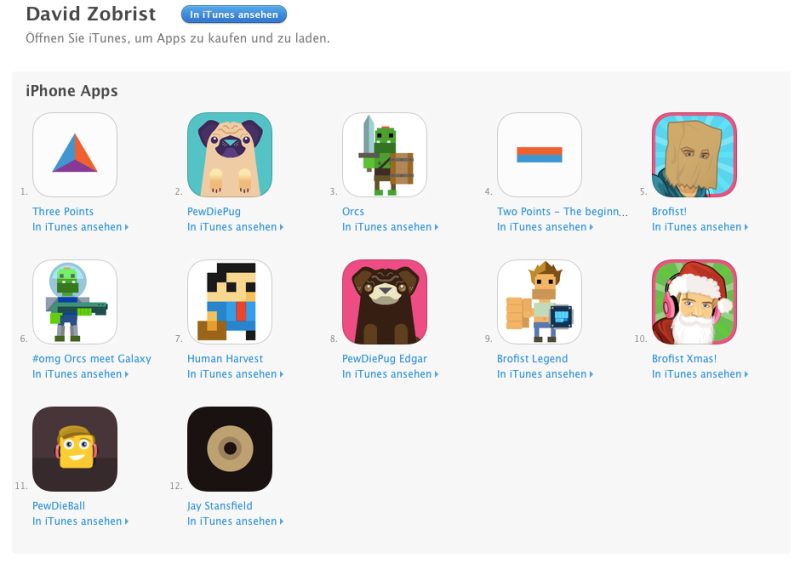 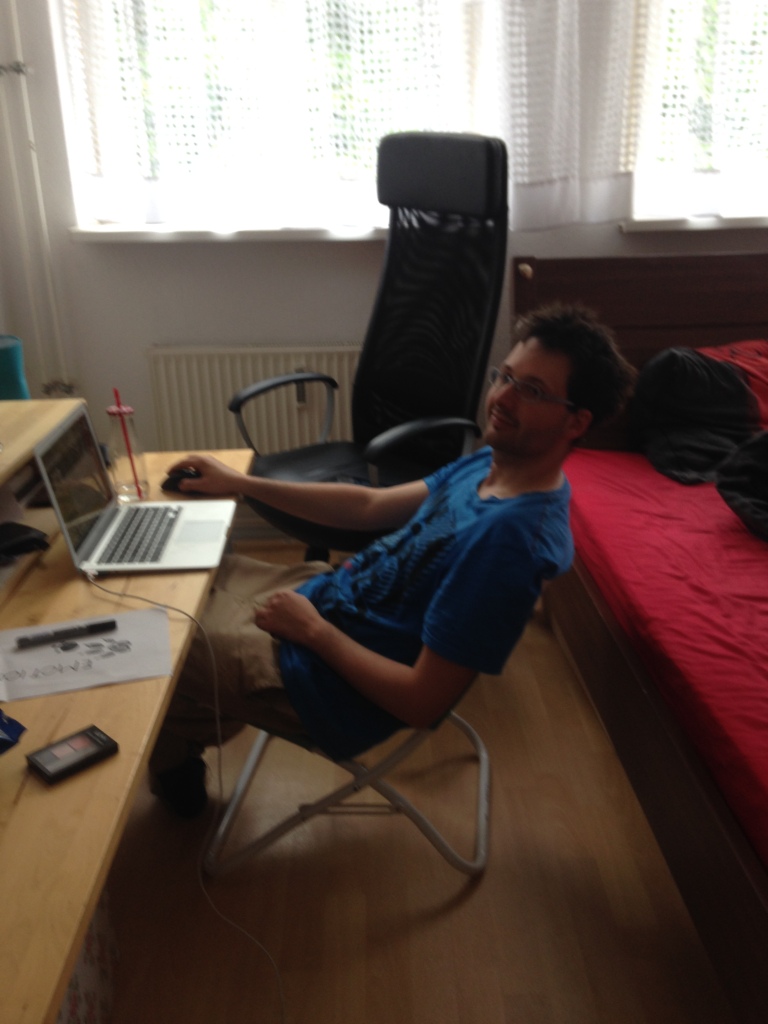 Big Thanks to Gamesalad

This is the time I know create games for living, alone from my home, lien in my bed doing what I love most, create video games.
Gamesalad enabled this path for me, together with it’s active community and tutorials by @tshirtbooth @The_Gamesalad_Guru which delivered key resources for a fast learning process (1 month full time).

As everyone here I had to learn the hard way, launching plenty of apps which where unnoticed and only resulted in a couple of downloads. Forced to change and re-invent what type of games I create multiple times, finding my path by try and error.
I was many times doubting myself but always could ring down this thoughts with the simple believe that I get better each time I fail.

As I advanced new helpful persons crossed my way and with one of them, his name is Sabba Keynejad we created a simple game called „Three Points“ that got featured by apple over a full week Europe wide in the „Best New Games“ section. And another week in a few european countries as „What we are playing“ and „Best Indie Games“. Leading to 400.000 Downloads and ranking us on only 1 spot behind candy crush on the App Store, back than.

We did not know much about monetization and the game was free, the only advertising was an Apple iAD’s Banner Unit. Generating in this month around $ 1200, we sold a copy of the game to a marketer for $ 2000 which pushed his app even higher. (he called it Impossible rush)

Since we did not create enough money looking at the incredible amount of Downloads, it was time to overthink the way we make money in our apps. I spend a full month updating my back than 28 Apps with Chartboost interstitial Ad units. Which performed from day 1 well. Unfortunately we were no longer featured.

Calculating backward we could have made extra $ 12.000 to $20.000 if we would have had the chartboost Advertising in the game from the beginning. But thinking like this is poisonous, so I moved on.

Sabbe Keynejad and myself create a game called PewDiePug, two months before the success of Three Points and the Pug game started to take off and this time we were prepared to make money.
It did by far not reach the Download volume of Three Points but it pays my bills since over 6 months, brining it constant cash which I share 50/50 with my partner. 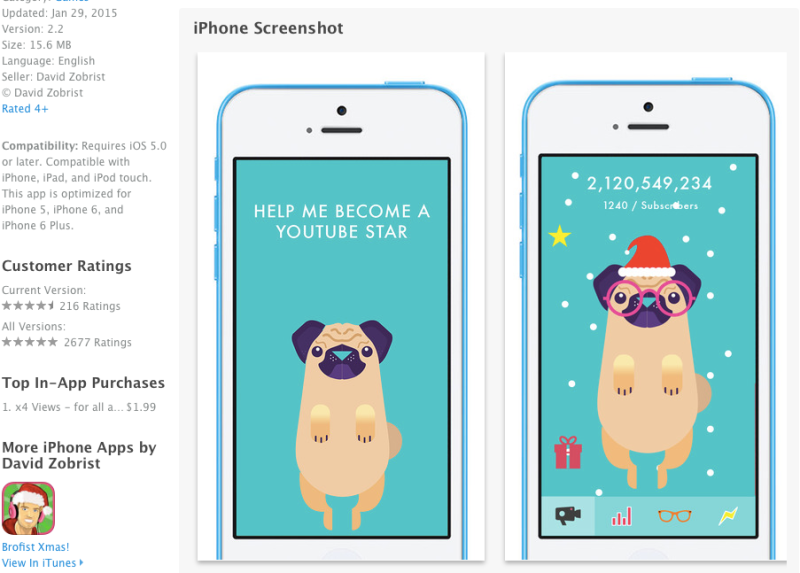 Getting a grasp of what people want and an improved Art Style learned by Sabba Keynejad I created my most recent title called „Orcs“. It is the one game that keeps Players in the longest up to 4 hours straight can be seen in the analytics. And it monetizes therefor the best so far, beside of not having the traffic of Pewdiepug. 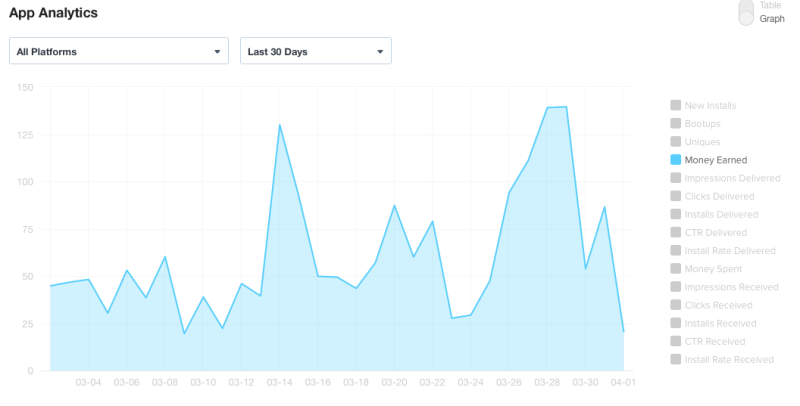 Also players keep the app and wait for updates, they became loyal fans which is the greatest what can happen to your Indie Game. It’s great to know that people look forward to your next update and brings back that feeling you are really looking for when making games, it feels purposeful, you make them happy.
Bye,
David Zobrist

Welcome!
These are the very best mobile Games by David Zobrist 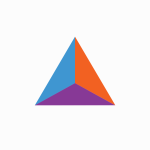 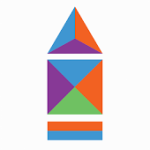 My best mobile games so far

Two Points the simpler Version of the successful Three Points is now playable for free in your Browser.
Here: http://gsrca.de/126008

Here one of my newest games. Gameplay obviously actually three points my earlier game, but with a fresh look, feel,music and balancing. Went live 1. November, this Saturday.

So a month ago I created this app called Three Points with Sabba Keynejad. It reached 330.000 Downloads and reached the top ten in the puzzle category in many countries. We also created Four Points, Five Points and Six Points of the same series. Since we both didn’t knew much about monetization, we did not make reasonable money. But we were happy to see that we can do it.

Since the Chartboost Full Screen Ads are in,  some „ok“ money started to flow into the cash box, we just put it in far to late.

What ever back then a guy from Calefornia contact us, his name was Carlos Fajardo.
He told us he wants to buy the app or a copy of it. So Sabba and me made him a copy directly on his apple account for 2000 usd.

Since we didn’t went all to profitable out of our success title this offer was more than welcome.
He told us that he will get another version in native code since there were limitations because I use gamesalad to create my games. This tool does not enable to use third party SDK’s, which he required for his plan to conquer the app store. Which he was pretty sure about, he seemed to have the tools. It’s now about one month later and I just read this article on the popular page „Business Insider“.

So he got a version of four points made by two 15 year old boy called Ben Pasternak for 200 USD and called it Impossible Rush.

Ben contacted me via Twitter, he straightened out everything. Which is cool since I initially also thought he might have been just a clever marketing trick, but he really exists. It iss a nice motivation boost for a young person to have such a success and this is a beautiful thing. So no anger on my side.

„A 15-year old Australian kid was so bored in a science class one day he coded an app, with the help of another teenager in the US, that took over Vine and Tinder in the US app charts.“

It’s impressive how Carlos did this and I hope to also get more attention on Three Points due the current hype of these type of games, which I by the way came up with..

So I am sorry I just read a lot player comments in the App Store on my newest app Three Points:

„Broken by MentalMoon Latest version doesn’t work at all.“

„Great app, terrible update! by celab74 App is really good and the ‚less is more‘ cliche is very appropriate! However after the last update I am unable to see my previous high-score nor am I able to actually play the game, I hope this issue will be addressed swiftly.“

I invested into the issue and can’t find any reason, my best guess is that I manipulated the save array to add the new premium state. And now the game tries to load the array but the new entries confuse the old version of the game.
So it freezes right after the loading screen.

This problem should only happen to players who already had the game.
Not to new players. A really bad mistake I hope you give the game a second chance.

I will be aware of that issue in future.